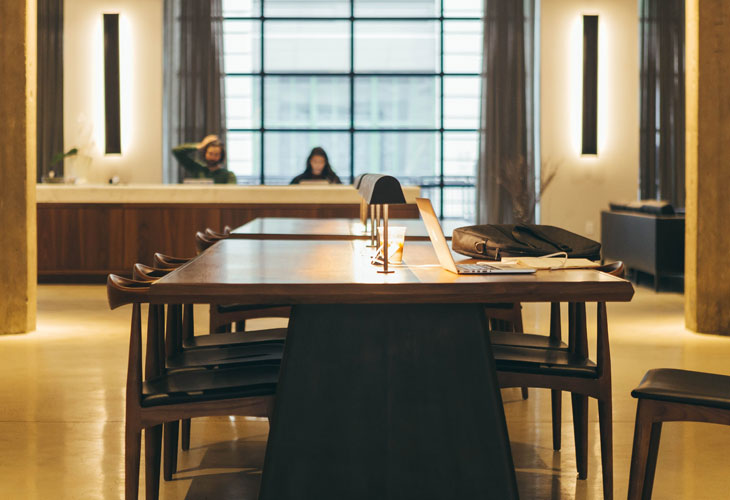 Hot desking – where employees have no designated working space – is not a new concept to the modern office set-up. For years now, forward-thinking employers have introduced a hot desking policy to help stimulate creativity and encourage collaboration.

But could 2019 be the year that the co-working dynamic fully establishes itself as the frontrunner in office design? Ahead of the publication of the British Council for Offices’ best practice guide, all the signs are that co-working is about to have its moment.

The BCO guide is considered the authority on office planning: from guidance on temperatures to occupier densities and on to small power consumption, it sets the benchmarks that industry should strive to attain.

Since the guide was last published in 2014, there have been significant changes in how we approach office design. Employers no longer want a tick-box exercise where a successful design includes open plan space, meeting rooms and break areas.

Instead, they are now adopting a different mindset – but one that has always been the norm for Halliday Fraser Munro. People are placed at the heart of the process: the key driver for successful office design lies in how the building affects the productivity and wellbeing of staff.

Collaborative working allows for greater diversification of available space, simply because less desks are needed. In the last two or three years, the co-working approach has allowed for a much denser occupation. Traditionally we would allocate 10-12sqm per person, but that’s now reduced to 6-8sqm simply because not everyone has to have their own allocated desk.

The result of densification is that different types of work spaces can be created – a range of environments which can help to stimulate and increase productivity. For example, it’s not uncommon to see spaces designated as focus rooms or to have quiet zones where the use of technology is not permitted.

The range of different spaces is also dependent on the type of industry that the office occupier is involved in. Innovation hubs and maker spaces, for example, are often needed by firms involved in the creative and technology sectors. The possibilities are extensive, and it all comes down to which set-up the occupier considers will add most value in terms of productivity.

But it’s fair to say that, just like any other type of office design from cubicles or open plan, co-working space will not suit everyone. There will be the champions, those who can see that hot desking offers opportunities to improve communication, get a better understanding of other departments and the skill sets of colleagues, but equally there will be the detractors.

It’s a fact of life that people feel territorial about their own space. They like the security that having their own designated environment brings and the sense of familiarity in being surrounded by family photographs and personal belongings.

The idea that at the end of the working day you put all your belongings in a locker only to have to collect them the next morning and go to find a space to work in is unpalatable to some people. But on the flip side, the principle of shared working space carries a positive message – that everyone in the company is equal.

The move towards denser occupation is, I am sure, just one of the many themes that will emerge in the BCO best practice guide 2019. The guide, which draws on experience of the BCO membership, will no doubt also take into consideration how developments in AI and other technologies can create more efficient buildings, in terms of both the bottom line and the environment.

Regardless of what emerges from the report, one thing remains certain and that is that office design will not stand still. Collaborative working may set the standard for the immediate future, but who knows what office space will look like in the decades to come.

Want even more insights from Halliday Fraser Munro? Sign up to our news!